Ayyyeee… What’s Goodie Everyone. So I got some tea and it involved Donald Trump getting fact checked by Twitter.

On Tuesday Twitter slapped a fact-check label on President Trump’s tweets for the first time, a response to long standing criticism that the company is too hands off when it comes to policing misinformation and falsehoods from world leaders. 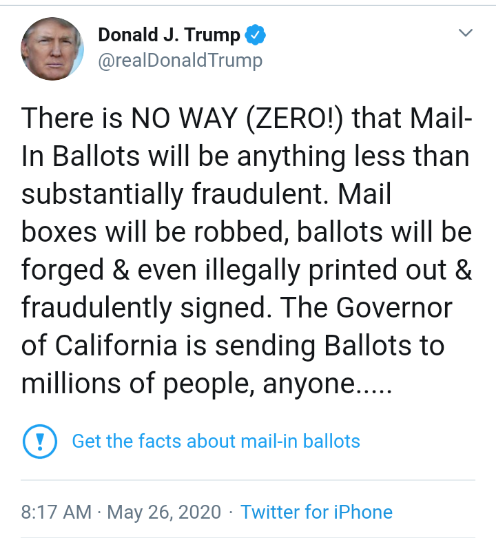 The move, which escalates tensions between Washington and Silicon Valley in an election year, was made in response to two Trump tweets over the past 24 hours. The tweets falsely claimed that mail in ballots are fraudulent. Twitter’s label says, “Get the facts about mail in ballots,” and redirects users to news articles about Trump’s unsubstantiated claim.

The label directs users to articles by CNN, The Washington Post and the Hill, along with selections from the articles and a page summarizing the findings of fact checkers.

Twitter’s action quickly drew backlash from Trump and his supporters. Twitter “is now interfering in the 2020 Presidential Election,” the president tweeted. “They are saying my statement on Mail In Ballots, which will lead to massive corruption and fraud, is incorrect, based on fact-checking by Fake News CNN and the Amazon Washington Post.”

For 14 years, Twitter has allowed misinformation by world leaders and everyday citizens to spread virtually unchecked. Its leaders have long said users would engage in debate on the platform and correct false information on their own.

But Trump has made many false claims on social media, particularly on his preferred medium of Twitter, and has also attacked people in ways that critics have argued could violate company policies on harassment and bullying.

Twitter faced a barrage of criticism earlier Tuesday over another set of Trump tweets. The widower of a former staffer to then Rep. Joe Scarborough asked Twitter chief executive Jack Dorsey to delete tweets by Trump furthering a baseless conspiracy theory about the staffer’s wife’s death. Those tweets are still up, a reflection of social media companies’ approach to policing content that can appear inconsistent even as they have stepped up their enforcement.

Twitter is debating whether to take action on the Scarborough tweets, said a person familiar with the discussions who spoke on the condition of anonymity because he was not authorized to speak publicly.

Twitter, which has roughly 330 million users compared to Facebook’s 2.6 billion, has not had the resources or the institutional will to engage fact checkers.

Soon after, Twitter applied the policy to world leaders, removing tweets by Brazilian President Jair Bolsonaro and Venezuelan President Nicolás Maduro, arguing that the tweets about breaking social distancing orders and touting false cures had such potential for harm that labeling them would be insufficient.